A Book Review: Misfits (Plus EXCLUSIVE interview with the author!)

This week I'm reviewing the first in a fractured fairytale series that I hope you've heard about already. If you haven't, it is so worth the read, and I can't wait to share my thoughts with you.

This post comes on Wednesday because it's the three-week anniversary of having my jaw surgery. I thought it would be fun to celebrate having made it this far healing-wise, and on how far this blog has come. When I first blogged about a book series I'd thought would be the perfect start to this site, I never imagined the way my small pet project would take off.

This month it's going on six months, and already I've been blessed enough to host author interviews, participate in a week of book memes, and to interact with a number of amazing authors and fellow book bloggers. This has been an incredible journey, and I hope I get to enjoy six months more of it!

There may be minor spoilers as I try to give an accurate picture of the book. The interview has no spoilers.
(The discussion questions will have spoilers, since they are supposed to be used after reading the book.)

Check out the awesome cover and review below. 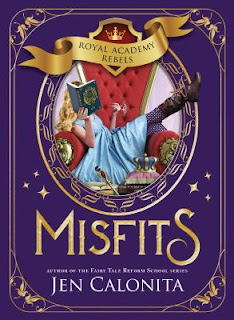 But Devin has major reservations about her new school and her royal future. How can she be a princess and the best creature caretaker Enchantasia has ever seen? It doesn't help that there's something seriously weird about RA's headmistress. Olivina seems obsessed with preparing students for possible attacks from villains ("A royal can't rule when they're stuck in a tower!") Devin gets that being Snow White and Rapunzel's fairy godmother has probably made Olivina pretty paranoid, but anytime someone steps a toe out of line, Olivina becomes more of a fairy nightmare than a fairy godmother.

Something isn't right with this lady, and Devin is determined to find out what. But what Devin discovers could change the fairy tale world forever...

Language: "Darn" is used once, along with a "thank God." Expressions like "For Grimm's sake", "fairy be", and "for the love of Grimm" are used multiple times. One snooty princess snaps at Devin, calling her a "misfit".
Violence: Some implied threats of death during suspenseful scenes. It's mentioned that some "unruly" students are banished from Royal Academy.
Romance/Sexual Stuff: It's mentioned that one of the princes, Heath, has a large group of female admirers, who all seem to want to be his future queen. There is also a "Most Likely To Snag A Prince By The End of Year One" superlative. A conversation between Devin and Heath has Devin's dressmaker mistakenly thinking they're a couple.
Spiritual Elements: None
Magic: Since the book takes place in a fairytale world, there is a large amount of magic here. Various magic spells are mentioned and used. Magical creatures/species such as unicorns, elves, dragons, pixies, and harpies are mentioned or make an appearance.
References: There are references to different fairytales, various fancy foods, and to various characters and settings in Calonita's Fairy Tale Reform School series.
Other Issues: The villain of the story lies about her true, sinister intentions, using her magic and influence to do what she wants. She also lies about her past including a former Royal Academy student. Once Devin's lady in waiting eavesdrops on a conversation.
Where To Buy: Misfits is available on Amazon, Sourcebooks, eBay, Barnes & Noble, Abebooks, Alibris, and Indigo. There is also an audiobook version done via Audible.
My Age Range: I think kids aged 10 and up would enjoy this book the most.
Read Aloud: I think this book would be better read alone.
My Opinion: I'll confess that I was a little late on the Fairy Tale Reform School and Royal Academy Rebels fan train. I honestly wish I could've gotten into the books sooner! I am one of those strange readers who read Misfits first, and then Flunked. As someone who's up to date on both series now, I'd suggest that you read all the Fairy Tale Reform School books first, before heading onto this one. Both are great as stand-alones, but it really does make more sense when you read them altogether.
I really, really enjoyed this book, and I think it was in part to Devin's defiant personality. I loved seeing her doing what she loves as she cares for creatures, and befriending the different-but-similar Sasha and Raina. I also enjoyed all the fun twists on fairytale tropes, and what we know as "normal" for fairytale princesses. Most of all, I liked how Calonita's writing makes you feel like you're beside the characters as they live their lives.
My favorite character in the book (other than Devin, of course) would probably be Logan. I really enjoyed getting to learn more about him and watch him go on adventures with Devin and her friends, and would love to see him become even more developed as the series goes on.
I recommend this book for anyone who loves fairytales, who loves creative spins on fairytales, and who's looking for a fun, emotion-packed adventure.
Discussion Questions:
-Devin would rather take care of hurt animals than act like a princess, but her mother doesn't seem to understand this as well as her father. How does this make Devin feel? If you could give Devin's mother advice on how to raise Devin, what would you tell her?
-Headmistress Olivina reveals that she has more sinister motives when running Royal Academy. How does she hide this? Where were some places where you picked up on her more controlling nature?
-Devin and Logan both have to deal with the ways people view princesses and princes. From the story and any fairytales you've read, how are princesses supposed to act and behave? How are princes supposed to act and behave?
-Devin, Raina, and Sasha are three very different roommates. How are Raina and Sasha different from Devin? How is Devin different from Raina and Sasha?
-What was your favorite part of the story? Why?
-After reading this book, do you think you would want to be a princess or prince? Why or why not?
Spellbinding Stories: An Interview with Jen Calonita
September 21, 2020 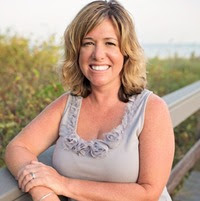