A Book Review: The Journeyman

Hi, everyone! Last week there seems to have been a little confusion post-wise. I had a post all ready, but apparently forgot to actually click the post button until Friday was over. So, that's why you didn't see anything new on here. Sorry about that! If you're interested to read last week's post, you can find it HERE.

This week I'm going to review another great school pick. This is a historical fiction read focusing on a part of history that's not usually mentioned, and I'm excited to share it with all of you.

This review has no spoilers.

The discussion questions will have spoilers, since they are supposed to be used after reading the book. 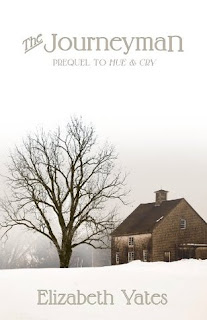 Series: Though not an established series, this story has a prequel, Hue and Cry.

Synopsis: What do you do when the world turns against you?

Jared Austin is hardly built for hard labor and farm work...his passion lies in making things beautiful. So when he is apprenticed to an itinerant painter, he cannot wait to bring color to the drab farmhouses of New England and someday prove himself worthy to win the hand of his childhood friend, Jennet Thaxter.

Many years pass, and he arrives back in New Hampshire looking for work. At first he is welcomed by some of the farmers. But the year becomes a cold, fruitless one, and they begin searching for someone to blame.

Language: None, other than a few light insults based on appearances. Cursing is mentioned. One "God knows". Once the frank term "bosom" is used.

Violence: Jared's tale is a tragic one, as his mother died trying to keep him warm and his father, torn by grief, ends up blaming him and becomes physically and verbally abusive. (This issue is handled very carefully, and the author does her best to portray the man as flawed but sympathetic.) Death, and the threat of death, are various elements in the story.

Romance/Sexual Stuff: Jared carries a torch for a childhood friend, Jennet, and comes back to realize she's engaged to another man. Non-detailed kisses are mentioned.

Spiritual Elements: It's clear that Jared and many of the main characters are devout Christians. Prayer, Scripture passages, and Biblical truths are mentioned. A few "God bless" and "God be with you"s are said. There is a mention of the devil/devils.

Magic: Though not rooted in reality, it's mentioned that both Jared's father and a few restless townspeople start to believe he's cursed, or a witch in disguise.

References: Various events in American history, like the French-Indian War, the American Revolution, and the winter blight of 1816 are mentioned or portrayed.

My Age Range: I think kids aged 13 and up would enjoy this book the most.

Read Aloud: I think this would be a good read aloud.

My Opinion: I wasn't sure what to expect when I first started this book for school. The initial summary of the story didn't draw me in, and I found the beginning description and premise dry. Like staring at an abstract painting, though, the story eventually drew me in, and the rest of the novel passed way too fast for me.

The Journeyman is a close look at an often glossed over part of American history, through the eyes of a unique narrator with a relatable personality, love for beauty, and passion for creating that doesn't fade as he gets older. There were so many subtle themes, descriptions, and elements to this story that made the entire work shine. Unlike most of the books I read, it was hard to guess how the book would end, something I always love seeing! I also felt moved by Jared's overwhelming kindness and sense of self-sacrifice, despite all of the hardship in his life.

I'd recommend The Journeyman for readers who love learning about U.S. history outside the classroom, want to understand the pre-Civil War days better, or just spend time with an admirable character who consistently shows a new way to be seen as a hero.

-Jared continues to love Jennet Thaxter from afar, whether or not she returns his affection. Why do you think that is? What does Jared's actions around Jennet as an engaged woman show about him as a person and a Christian?

-How did meeting Mr. Toppan change Jared's life? Through his apprenticeship, how does Mr. Toppan show his care for Jared? Do you think Jared became as close to his teacher as he would have been to his father?

-In your opinion what was the most powerful or important scene in The Journeyman?

-Take a look back at what various people say about America as Jared travels from place to place. How much of that is their opinion, and how much of it is what actually happened?

-Jared has to deal with a group of certain settlers believing he's brought a curse upon their fields and town. What did he do to prove himself? If you were in Jared's place, what would you have done?

Thanks for looking at The Journeyman with me! Please consider reading the book for yourself, or recommending it to someone that might be interested.

Another exciting announcement this week: thanks to some lessons provided by the Young Writer's Workshop, I am going to be starting an email list soon! I'm still working out the details, but right now I'm hoping that it will give me a chance to connect with my blog readers, provide exclusive Stepping Stones Book Reviews content, and share more about me and my own writing journey. If you're interested, please stay tuned for more information.

Next week, join me on Friday for another post...