A Book Review: Dodgeball, Drama, and Other Dilemmas

I was looking through all my books earlier this week, trying to find something to review...and I stumbled across this lovely title again 😀 As I've never heard this series mentioned by anyone else or featured on other blogs, I figured: why not review the rest of the trilogy so others can use it and benefit from it? So, here we are!

This review has no spoilers. The discussion questions will have spoilers, since they are supposed to be used after reading the book. 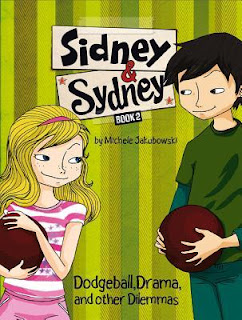 Title: Dodgeball, Drama, and Other Dilemmas

Series: This is the second in a chapter book trilogy featuring Sidney and Sydney. (Though some of the story facts included in the book might make more sense if you read the first one, I think you can easily read this as a standalone.)

Synopsis: Sidney and Sydney have tackled first-day-of-school problems, avoided Halloween disasters, and proven that boys and girls can be friends. The rest of third grade should be easy, right? Wrong! From dodgeball fights to school play drama, these two friends have a lot to learn!

Language: There are a few mentions of arguing, one "duh", and a mention of grumbling.

References: In one chapter Sydney mentions feeling ready for Hollywood.

Other Issues: Sydney acts a little bratty toward her friends in one scene. Though not technically an issue, it's mentioned that Sidney's friend Gomez has Type 1 Diabetes.

Where To Buy: Dodgeball, Drama, and Other Dilemmas is available on Amazon, eBay, Barnes & Noble, Abebooks, Book Depository, Alibris, and Better World Books.

My Age Range: I think kids aged 8 and up would enjoy this book the most.

Read Aloud: This would be a good read aloud, though (like with the other books in the series) it might be better to have the reader share the book with friends or family.

My Opinion: Ever since I discovered this series, I've enjoyed the Sidney and Sydney books due to the simple storyline, the well-done way they handled Gomez as a Type 1 character, and the emphasis put on boy-girl friendships. Like the previous book in the series, the story also comes with colorful pictures, large type, and easy-to-read vocabulary, which makes it a great pick for kids just starting to get into chapter books!

This part of the trilogy involved Sydney and Sidney interacting during school more, which was a nice way for the author to develop the characters and their respective interests/skills. Sydney having a flair for acting didn't surprise me at all, but it was fun to read about Sidney trying it, too! Rereading this story to write the review, I was also impressed by the lack of questionable content. Even with books aimed toward younger readers, bad attitudes, excessive rude humor, and puppy love are often shown, if not accidentally encouraged. With the Sidney and Sydney books, you get what you see: just a fun, sweet story about growing up and growing together.

I'd recommend Dodgeball, Drama, and Other Dilemmas for young readers looking for more about Sidney and Sydney, families who are looking for mainstream media with better values than the norm, or anyone who has an eight year old in their life and wants to see life from their eyes.

-What "dilemmas" do Sidney and Sydney face in the story? Are there any that you've faced too?

-Of all the activities mentioned in the story (dodgeball, drama, the spelling bee) which one would you want to do the most?

-Of all the activities mentioned in the story which one would you want to do the least?

-After Gomez won the spelling bee, he gave his prize away. What does this say about him as a person and friend?

-When they were practicing for the play Sydney was trying to help her friends, but they felt like she was being mean to them. What did she learn from acting like this, and seeing how it hurt them? In your opinion could she have done or said anything differently?

Thanks for joining me to look at Dodgeball, Drama, and Other Dilemmas! I hope you'll consider reading the book for yourself. If it doesn't sound like something you'd like, please consider recommending to someone else.

I am still open to review requests! If you're interested, click on my Review Policy page for more details. I WILL be updating the page in a couple of weeks, so stay tuned for that. 😉

Next week, I'll be reviewing the last book in the Sidney and Sydney saga, and then moving onto some of my (more advanced) other favorite books!

Email ThisBlogThis!Share to TwitterShare to FacebookShare to Pinterest
Labels: Book reviews, Books For Ages 8 and Up, Contemporary Fiction, J Authors