A Book Review: Daniel Webster (Defender of the Union)

Hey everyone! Sorry about my lack of replies to comments, as well as this late post. I'm back and will hopefully be more active on here.

This week I'm thrilled to be posting about a biography of Daniel Webster, which I've recently finished myself. Through the first few pages was drawn in by Daniel's obvious love of books and storytelling, which I think is something most of us can relate to!

This review has no spoilers.

(The discussion questions will have spoilers, since they are supposed to be used after reading the book.) 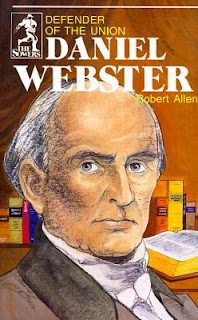 Title: Daniel Webster: Defender of the Union
Author: Robert Allen
Series: This is part of Mott Media's Sowers series, but can be read as a standalone novel.
Targeted Age Range: 8+
Synopsis: Read for yourself...from the actual pen of these noted people from world history..of their relationship to Jesus Christ...and how that relationship affected their decisions...and the course of human history!
See history come alive...learn of many hidden facts involving famous men and women from the pages of their diaries, letters to friends, books they wrote, etc.
Quickly turn to the inside front cover to read more of one of your favorite Christian heroes. You'll be amazed at what has been left out of our history books!
Language: Some mentioned instances of verbal attacks.
Violence: War and death are mentioned. Daniel's young daughter dies from tuberculosis.
Romance/Sexual Stuff: The book mentions Daniel's meeting and marrying two women (once as a young man and later as a widower).
Spiritual Elements: The Mott Media Sowers series is designed to give children role models in history to look up to, and so the issue of faith is stressed very deeply in the book. Praying, learning and reading from the Bible, and generally living out Christian principles are mentioned frequently, as well as different events and references from the Bible.
Magic: None
References: Various historical events, places, and figureheads are mentioned, as well as different classical texts and volumes from well-rounded speakers. The book also quotes verses from old William Cowper hymns.
Other Issues: Slavery was a very hot topic at this time, with many men on different sides fighting for their opinions. This part of the story is handled delicately, with Daniel one of many arguing for emancipation, but all the same it'd be best to discuss and think on this part of American history after reading, especially if you're looking at this with a friend or family member.
Where To Buy: Daniel Webster: Defender of the Union is available on Amazon, eBay, Alibris, Abebooks, Book Depository, and Better World Books.
My Age Range: Due to the more advanced vocabulary that comes from some of the quoted speeches and letters, I think kids aged 12 and up would enjoy this book the most.
Read Aloud: This would be a great read aloud.
My Opinion: Often I have to give credit to my school curriculum for picking out such great books. If I hadn't been already assigned to read most of what I recommend, I wouldn't be recommending it...and the number of posts on this blog would probably dwindle too.
Daniel Webster: Defender of the Union felt like a breath of air from all of the boring, dry chapters I'd normally consider "learning about history". It was very similar to Abigail Adams: Witness to a Revolution in that the featured person immediately caught my attention. At the same time it was similar in that the story gave me a more balanced view of history. At their core, many of the "greats" in history were more than names. They were like us. Not perfect, but trying their best, and often clinging to faith with peace that surpassed all understanding.
Despite some of the heavier subject matter touched on in this book, this vivid, exciting biography is appropriate for everyone, and I'll argue has even more meaning if you're older than the age range it was meant for. It's a fascinating way for anyone to glance back at where we've come while moving forward today.
Discussion Questions:
-What was your first impression of young Daniel Webster? Did this impression change as you read through the rest of the story?
-What were some of the ways Daniel provided for his family over the years?
-What role did faith play in young Daniel's life? What role did it play as a teen? An adult?
-Daniel gave up many of the years he could've spent at school to provide for his knowledge-hungry brother, Ezekiel. If you were in Daniel's place would you have found it easy or hard to do this? Why?
-What do Daniel's various actions in Congress show about him as a person?
-What legacy do you think Daniel left on the world? List different details from the biography to support your answer.
Thanks for looking at Daniel Webster: Defender of the Union with me! I haven't reviewed as many historical fiction/biography reads on here, but it looks like I'm on a roll. Expect to see more recommendations like this in the future.
Have you read this book already? If so, what did you think about it? If not, would you want to?
Like always, I'm open to review requests (both for book reviews and author interviews)! Before letting me know about a certain review or interview you'd like me to post about, check out my Review Policy page before suggesting.
On Wednesday next week, I'm interviewing Hailey Huntington, the founder of Ink Drinker Book Boxes! This is the first non-author interview I've held, so I'm really excited to share it with you.
Posted by JadeSky at 9:06 PM

Email ThisBlogThis!Share to TwitterShare to FacebookShare to Pinterest
Labels: A Authors, Biography, Book reviews, Books For Ages 12 and Up