A Book Review: Lilies of the Field

Hello! This week I wasn't sure what to review (as I haven't been reading a lot of new books lately) so I'm going to be reviewing a nuanced classic I found through school. Hope you enjoy!

This review has no spoilers. The discussion questions will have spoilers, since they are supposed to be used after reading the book. 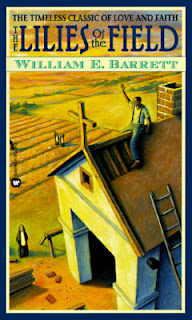 Title: The Lilies of the Field

Series: This is the first in a duology revolving around one of the main characters, Homer Smith.

Synopsis: One of the most beloved of modern classics returns with a beautiful new cover. The enchanting story of two unlikely friends, a black ex-GI and the head of a group of German nuns, The Lilies of the Field tells the story of their impossible dream--to build a chapel in the desert.

Violence: A few mentions of death.

Spiritual Elements: A main part of this story involves Smith, a man raised in a Baptist household, unofficially hired to be the architect of a new cathedral. He and the German nuns who ask him to do this have a few times where they clash, verbally or mentally, over different opinions and religious experiences. Many times the Bible, Biblical themes, the Sabbath, and ways of worship are mentioned.

References: Various now-historical terms, behavior, and songs are mentioned. A few paragraphs allude to Homer Smith's former life as a member of the U.S. military. One mention of Germany being a Communist country.

Other Issues: Though less prevalent than many of the other themes, the lingering effects of racism are shown in the story, especially through the way Homer views himself as a person. There is a mention of smoking and of building a privy.

Where To Buy: The Lilies of the Field is available on Amazon, eBay, Barnes & Noble, Abebooks, Book Depository, Alibris, Indigo, and Better World Books.

My Age Range: I think kids aged 14 and up would enjoy this book the most.

Read Aloud: I think this book would be better read alone.

My Opinion: When I first opened up this book for school, I was a bit confused about where the story was going. The unique style of the story, as well as the pacing, seemed to be heading in an unexpected direction: something that would line up with what the synopsis said, but also veer far away from it at the same time.

I was right. The Lilies of the Field was not close to anything I'd expected. The characters, the theme, the wording, the plot, all of it seemed to be taking a strange, wild turn. A bit unpredictable, if you will, just like Smith's own journey building the cathedral. Yet through all of that, through the sheer simplicity and complexity wrapped in one, The Lilies of the Field ended up being even more memorable and meaningful, because the author decided to take this literary path.

I'd recommend The Lilies of the Field to anyone, whatever they're going through in life. Because of the way this small story handles a variety of themes, motivations, and issues, the book is incredibly diverse in the audience it is able to reach. I especially liked the open-ended way they handled faith: acknowledging its power but allowing the reader to come to their own conclusions about it.

-What was your first impression of Homer Smith? The nuns? Did any of these impressions change by the end? Why?

-Homer is asked to build a cathedral for the nuns. Why does he refuse at first?

-What was the priest's perspective on Homer being there to build the cathedral? Why do you think he believes this?

-What is your favorite part of the book? Why? Least favorite?

-Homer believes working for the nuns will take away his freedom. Why? Do you believe this is true? Why or why not?

-Do any songs remind you of Homer Smith, the nuns, or the book in general? Why? If so, which are they?

Thanks for joining me to look at The Lilies of the Field with me! I hope this gave you another TBR list entry, or a suggestion for someone else.

My summer schedule is a bit packed this year, so you won't be seeing as many posts from me compared to last year. I will currently be attending two writing camps between June 13th and June 26th, so you won't see any other activity for a while. I also have several days in July that I will be busy, so feel free to stay tuned for those dates when announced! Thanks again for reading.

Email ThisBlogThis!Share to TwitterShare to FacebookShare to Pinterest
Labels: B Authors, Book reviews, Books For Ages 13 and Up, Contemporary Fiction, Historical Fiction